The H-Trap Professional Horse Fly Trap System continues to be the first choice amongst  researchers studying tabanids (aka horse flies) around the world.   A newly published study entitled “Seasonal abundance of Tabanidae (Diptera) on a farm in southern France” recently appeared in the scientific publication,  Agriculture and Natural Resources (54 (2020) 158-164).

The authors Azza Ferjani, Lucas Etienne, and Gérard Duvallet conducted the study using 7 H-Traps on a farm near Montélima in southern France.  The study spanned 21 weeks from May to September 2017, and it was the first time that this region has collected data on the phenology and abundance of horseflies.   In total, the traps collected 54,618 specimens, of those, the researchers identified 19 species.   The authors wrote, “The phenology or seasonal activity patterns of hematophagous insects such as the Tabanidae could help to prevent stress and pathogen transmission during peaks of abundance through the implementation of proper control strategies.”

In the published paper, the researchers also indicated that they chose the H-Traps because in previous  comparisons on testing and efficiency at this farm near the village of  Allan, the H-Traps “gave the best results in terms of attractivity (number of captured tabanids) and specificity (very few non-target fauna)” compared to other commercial and government surveillance traps such as the Nzi trap, Vavoua trap, and sticky blue screen.

This study received financial support from the French National Research Agency, under the FlyScreen project. 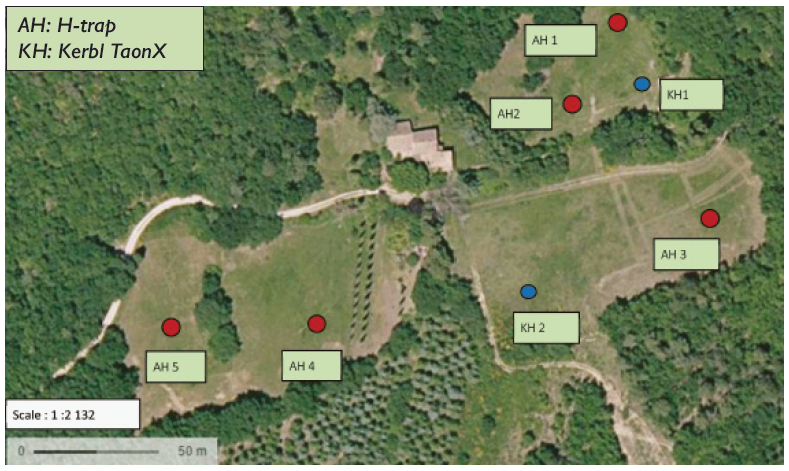 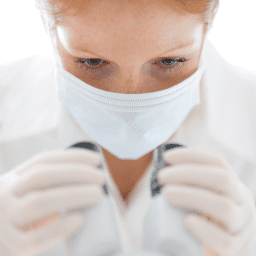 The news is out!  The Bite-Lite H-Trap Professional Horse Fly Trap has been vetted by researchers as the “best monitoring trap” for catching tabanids during  studies conducted in Florida and North Carolina in 2014 and 2015, respectively.   Researchers also found the H-Trap the most wind stable compared to other commercial and government surveillance traps used in the study.

The research took place at two locations in Cedar Key, Florida, including the Lower Suwannee Wildlife Refuge.     The North Carolina study took place in the city of  Beaufort.    The researchers conducting the tests in Florida were Daniel L. Kline and Jerome A. Hogsette of the US Department of Agriculture- ARS-Center for Medical Agriculture and Veterinary Entomology; in North Carolina, Donald A. Ruts from the Department of Entomology at Cornell University conducted the testing.

Besides the H-Trap, the Florida tests utilized two other commercial horse fly traps:   the Horse Pal (HP) and a Nzi government surveillance trap which was modified  for this study.   In North Carolina, only the Horse Pal and H-Trap were compared.    In North Carolina, the H-Trap caught nearly double the specimens of tabanids (1458 compared to 720) during the four month study from June through September.   At the Lower Suwannee Wildlife Refuge, the H-Trap caught the most specimens (2006 compared to the Nzi 938 and the Horse Pal 541).

The study can be read in the  Journal of Vector Ecology, Vol. 43 (1): 63-70, 2018.   Click here or below to learn about more about the study entitled “A comparison of the Nzi,  Horse Pal, and Bite-Lite H-traps and selected baits for the collection of adult Tabindae in Florida and North Carolina.” 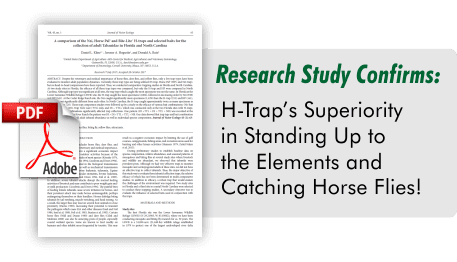 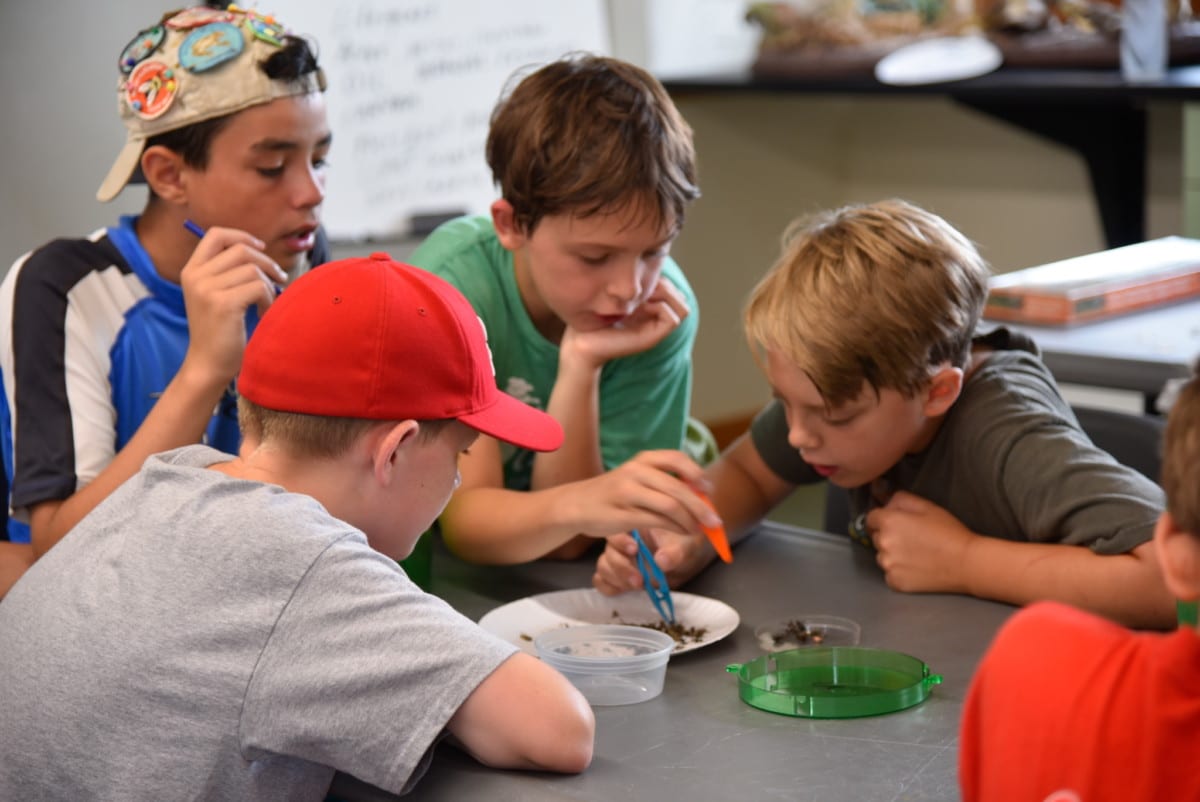 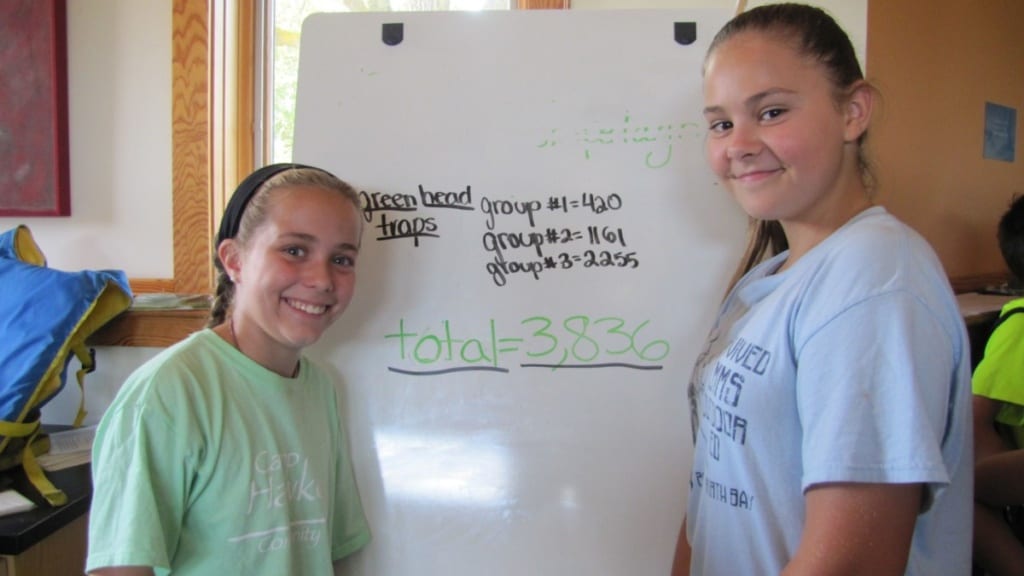 Bite-Lite’s Biting Insect Lure came on the market in 2018 following testing in Massachusetts and Texas.    Our research has shown that our new biting insect lure has been proven to catch more biting insects when used in conjunction with the H-Trap Professional Horse Fly Control System.     Bite-Lite had two tests performed in 2017 to determine the new lure’s efficacy.    The tests were performed at the Wellfleet Bay Wildlife Sanctuary in Wellfleet, MA as well as two Texas counties (Harrison and Houston counties).

The Biting Insect Lure contains the chemical octenol.  Because it is considered a pesticide, it must be registered in the states it is sold.    Bite-Lite chose to register the new lure in the top states where the most H-Traps were sold last year.   Currently, buyers in the following states can purchase our biting fly lure Colorado: Connecticut Florida, Georgia, Kentucky, Illinois, Indiana, Kansas Louisiana, Maryland, Massachusetts, Michigan, Minnesota,  Missouri, New York, New Jersey, New Hampshire,  North Carolina, Ohio, Pennsylvania, Tennessee.

Mark Faherty, the research scientist at Wellfleet Bay,  supervised the counting and scientific methodology.     While conducting the testing, the sixth to eighth graders rotated the lures each week after each count during the testing.   (Rotations are necessary to avoid positional site bias.)   The experiment lasted three weeks, and approximately 54 campers participated in the three weekly camp sessions.   Each week, the participating campers counted horse flies and by the end of the experiment they helped calculate the total number of biting flies as well as the average percent of the flies caught in the control trap (no lure) versus the total caught in the trap with the lure.   The results are shown below, and indicate that the Bite-Lite Biting Insect Lure caught five times more horse flies than the control: At Wellfleet Bay, the testing could not have been accomplished without the help of the following.     property manager James Nielson who helped the campers set up the traps; Camp Director Emily Wolfe and her staff;  Sheila Hoogeboom and Julia Towne, in the Development Department who initiated the project; and  Jenette Kerr, the Communications Coordinator who shared some great pictures and blogs! 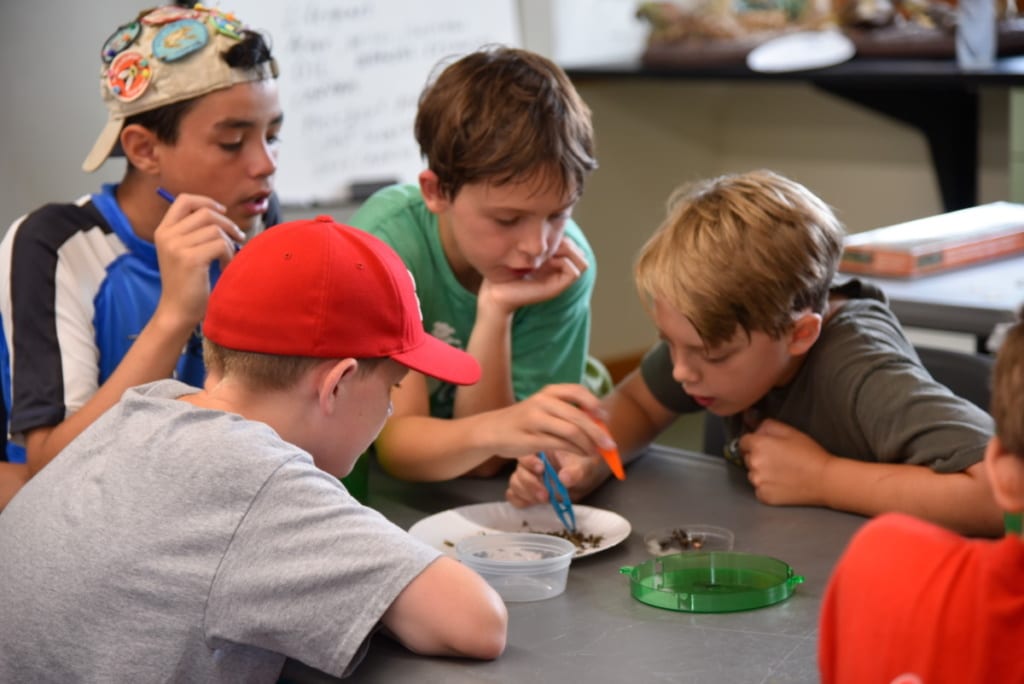 An Extension Livestock entomologist at the University of Texas and county agents conducted the other Bite-Lite Biting Lure testing between  August 12, 2017 to October 2, 2017.    Dr. Sonja L. Swiger worked with Bedoukian Research, Inc. to create a scientific protocol to determine the efficacy of horse fly traps and lures in beef pastures in Texas county agents in Harrison and Houston county performed three rotations with a control.    In the presence of the Bite-Lite Biting Insect Lure in both Texas counties, the combined total of flies caught compared to the control was three times more.

Part of the problem and the justification for the experiment was the following:

“Horse flies are important pests of pastured livestock throughout Texas and other regions of the United States. Controlling horse flies can be very difficult, costly and many times impossible with just chemicals.   Adult horse fly females consume blood daily and can inflict severely painful bites and wounds on an animal. Their limited contact with livestock, makes them very difficult to control with chemicals. Thus, making traps a logical form of management.  Many producers struggle to find the most adequate way to manage horse and deer fly populations in their pastures.”

The traps were checked, flies counted, and the lures rotated every 10 days during the experiment.  Every 30 days (after each lure has been in each position once), lures were changed out and the start position rotated; this methodology is important as a new lure has a higher release rate for the first few days.   Three rotations were conducted throughout this nearly 90 day period. 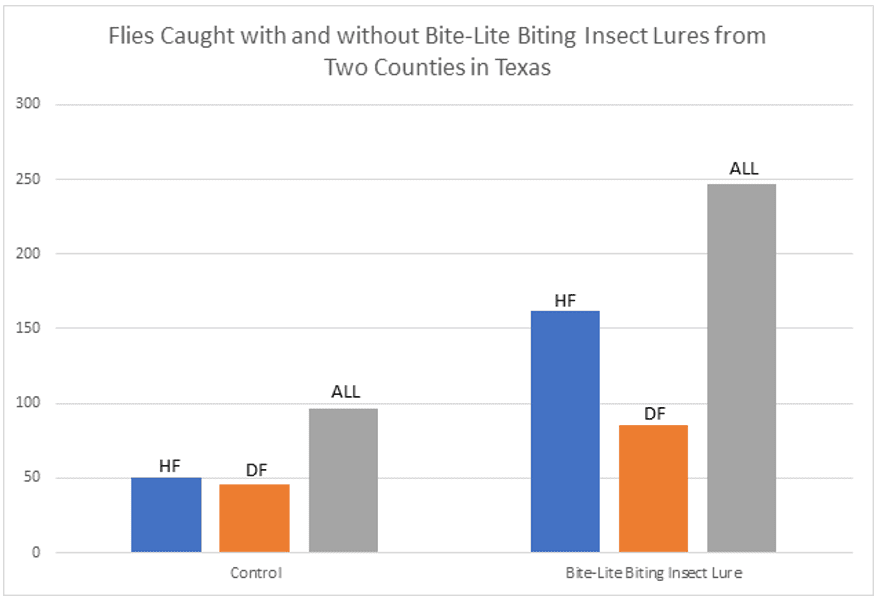 The combined total flies, separated by horse fly (HF), deer fly (DF), and all flies (ALL) caught by control (trap alone) or trap in the presence of the Bite-Lite Biting Insect Lure from two counties in Texas.

Bite-Lite continued testing the efficacy of the H-Trap Professional Horse Fly Control System in Cape Cod this July, 2016.   This summer was the third in a row in which the  Cape Cod Mosquito Control District and its division, the Cape Cod Greenhead Fly Control Project, tested our H-Traps under the watchful eyes of Gabrielle Sakolsky-Hoopes and Bart Morris, respectively. The test location for catching horse flies known as green heads this year was in Orleans, MA. 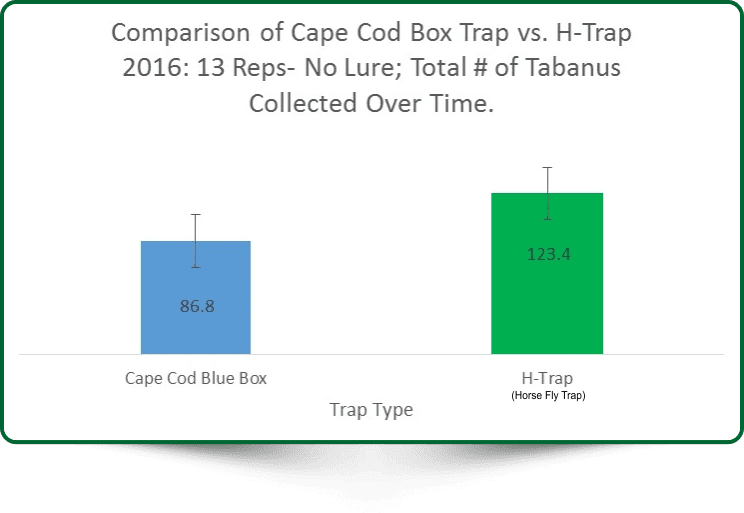 In the summer of 2015, the Cape Cod Greenhead Fly Control Project, a division of the Mosquito Control District, compared the efficacy of the standard Cape Blue Box trap with the H-Trap horse fly control system for the collection of Tabanids. Both the H-Trap horse fly control system and the Blue Box were baited with the same experimental lure. Two of each trap type were used in the testing at four sites in Northern Cape Cod. Each morning, the researchers emptied the traps just before 10 a.m., placed new lures in the traps, and ran the testing for three hours. Traps with lures were rotated between sites in order to prevent uneven population densities from skewing the test results. Testing took place at the four sites over 10 days, and the total number of Tabanids collected over time was recorded. The total number of horse flies collected was 5352; of that number, the H-Trap significantly collected more horse flies (almost 60%). 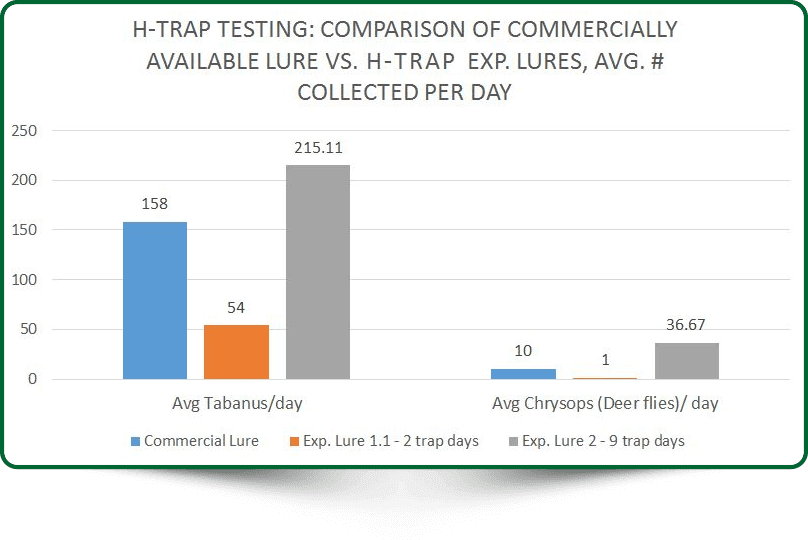 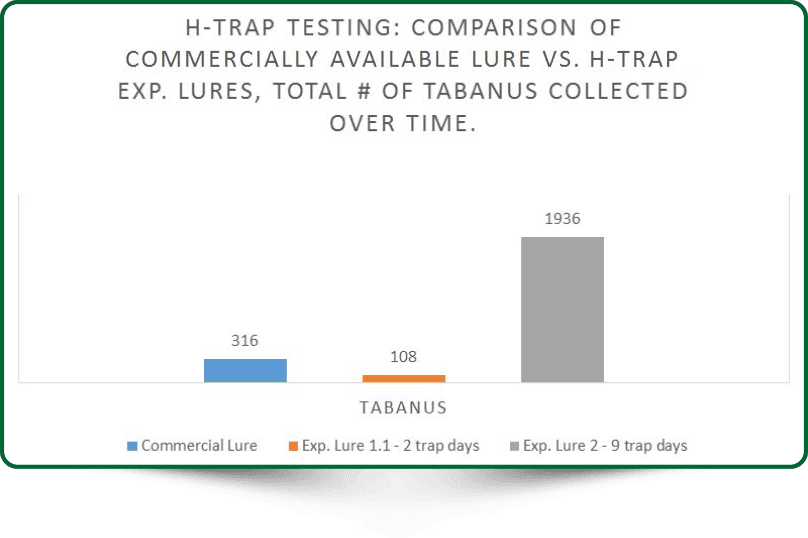 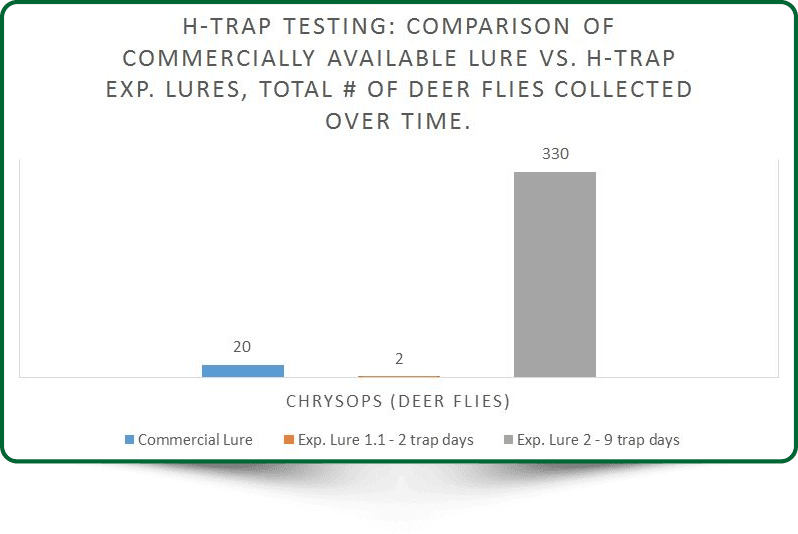 The United States Department of Agriculture conducted testing in the summer of 2014, comparing horse fly collections from two commercial traps, the H-Trap and the HorsePal, and one standard surveillance trap, the NZI, in a wildlife refuge that was near a horse boarding farm in Cedar Key, FL. Researchers set up these three different style traps, per each manufacturer’s instructions, using no added attractants. On the first day, the researchers placed the H-Trap, HorsePal, and NZI traps at one of three sites, and then rotated them 24 hours later. This method allowed all three traps to be tested at each site. The researchers conducted three repetitions, and recorded the total number of Tabanids collected over time. The total number of horse flies collected was 3483; of that number, the H-Trap alone collected more than half (57.5%) of the total number of horse flies!